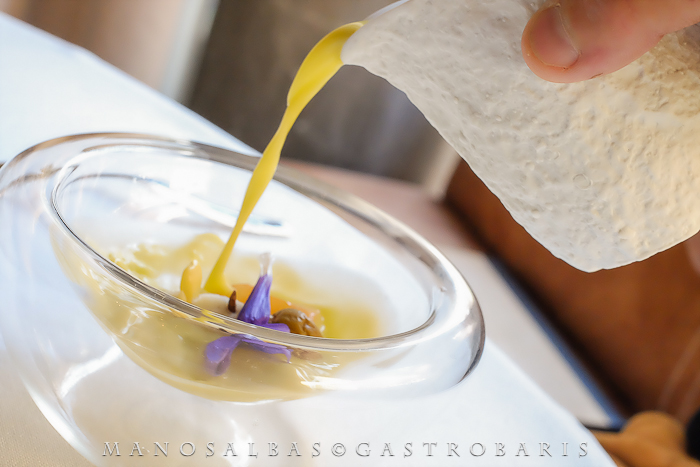 The ISPAL restaurant, a bold commitment to Seville ́s gastronomy

We went back to the ISPAL restaurant after our visit, when the project was still getting underway. We had preferred to let some time pass, and let the place have a trial run so to speak. However, we tried a few dishes, and then we learned about the philosophy of the project. Now, we have to acknowledge it is one of the references in Seville ́s hospitality.

The ISPAL restaurant is the new and bold bet of Group La Raza, with the idea of creating a splendid local staging, and while we are assessing this step by step, along with a kitchen and a wine list based on Andalusian products in general, and particularly on the ones from Seville.

Pedro Sánchez-Cuerda, prominent head of the family owning Group La Raza, has had a good sense for taking advice from trained professionals on various facets of gastronomy, with the necessity to carry out his original idea; a personal effort to bring traditional Sevillian cuisine to the 21st century. In this sense, and considering the structure of their menu, we find for example the first section, called Seville Archeology, where, with suggestions of Professor Isabel González Turmo, they restore past recipes.

A similar spirit breathes the section DNA Seville, recreating traditional dishes in which you always find some ingredient from the province. In this sense, the work of Sánchez-Cuerda and his executive chef, Antonio Bort; who is tireless and constantly searching, and investigating where and who produce quality food worthy of being part of ISPAL ́s suppliers.

Betting on each dish being characterized by an element primarily from Seville is not easy, it’s more than that, it’s risky. However, ISPAL manages the risks successfully because Seville has enough richness and variety, even in fish. The great river, when it meets the sea, offers us the richness and beauty of the Natural Park where Veta la Palma, is situated; whose ponds grow sea bass, dorados, croakers, prawns, and eels. An area where red crab, bleak or smoked sturgeon, also starring on the menu of Ispal, originate. Excellent snacks are offered in the tasting menu, dishes like Bleak in three steps, an impressive dogfish or an origina “Churro in chocolate”, the red rice with crab and smoked sturgeon from Isla Mayor, with a strong taste, or very imaginative and delicious sea bass from Veta La Palma with a stew of veal dumplings and its juice.

Our version of Shrimp Scampi

But did not we say at the beginning that ISPAL offers a great “staging”. Indeed, the setting is very cozy, impeccably atmospheric, and with another bet, equal to the bold menu, restoring the concept of fine dining, trusting in its service, even with a serving cart to complete some dishes in front of the diners. Crockery, varied and original, has been carefully chosen after a thorough search. Up to three different models of La Cartuja Seville, which are served with coffee and desserts. The glasses, of course, won ́t lag behind; we can enjoy Riedel ́s finest wine glasses.

The wine list is another factor of courage and personal commitment at the ISPAL restaurant. On the advice of sommelier Rafa Bellido, a list of numerous references was composed. All Andalusian, and you have the opportunity to try any of them by the glass. Special attention should go out to the menu of fortified wines, says Pedro Sánchez- Cuerda. “Why not? After all, the aim is becoming the world’s most important menu of fortified wines.”

Rice with crayfish and smoked sturgeon

Some of them we tested at the tasting menu that opened with a refreshing vermouth from Aljarafe, accompanied by a small snack, already anticipating the philosophy of cooking in the kitchen of chef Bort; some tasty fried pork greaves-flavored bread crumbs, of authentic taste, a well-made spread of goose from Constantina, and a version of traditionally seasoned creamy mashed potatoes.

The dishes are properly plated, but more importantly, they please your palate. As was the case with the cod brandade with lupine and cow heart tomatoes from Los Palacios, green gazpacho or the shrimp scampi version; then the finishing touch in the room; pouring hot olive oil over the shrimps.

There is still room for meat; and, almost ending the tasting menu, we enjoyed the Piglet Constantina in its juice, tasty and tender, accompanied by  Galleon Roble Colony also from the mountains of Seville, the Sierra Norte.

A happy discovery has been the magnificent goat cheeses produced by Rodolfo del Río at his cheese shop Well Done in a town called Espartinas, in the Aljarafe area. We were particularly intrigued by the goat cheese stuffed figs which harmonized perfectly with the craft beer from the barrel, 15 & 30. The extensive menu reached its climax when they brought us a cover wreathed in smoke, and underneath, a lukewarm French toast with caramelized toffee made of Pedro Ximenez Cream, frozen orange blossom and incense, captivating nose and mouth rightly coupled with a great Spinola Ximénez PX being pure raisin.

A public that seeks peace, good service and pleasure of a professionally dedicated team, feels at home at ISPAL. In its dining room, we can find classy tourists, entrepreneurs and executives on weekdays, and in the evenings and on the weekend, couples or small groups. Looking for a special celebration and finding it in the warm atmosphere of ISPAL ́s salon.